Blogs and the world 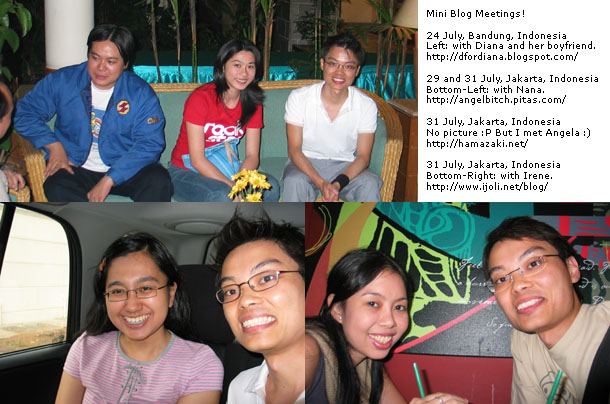 In everyday life, you’ll get to meet all sorts of people around you. But usually they’re close, all in one area. In one school, city, country… There’s a nice thing about blogs: the bloggers (owners) are all over the world. So you also get to read about stuff that happens all over the world. And sometimes you might even meet one of those blog friends, close or far.

During my trip in Indonesia, I had the honor of meeting these fellow blog friends:
Diana in Bandung and Nana, Angela Jessica and Irene in Jakarta.

It’s interesting meeting these people. I found it interesting that Diana is learning Dutch and that her boyfriend might want to come to the Netherlands for school. It does say on Nana’s site that she loves reading, but now I know how much she really loves it. It’s interesting that she’s interested in Indonesia’s history–which includes Holland. And that Irene has a boyfriend in this little country. I guess Angela was an exception: Japan all the way, hehe. And yeah, she’s prettier in real than the pictures you’ll see now and then on her site. And myself? I don’t know what impression I made on them. But it was fun meeting everyone.

And I hope to meet them and others in the future too.

So maybe I’ll meet you too.

Replies. Jen Jen: Maybe in the future, right? Never say never… Irene: Hehe. But we won’t be able to meet at a Starbucks 😉 Nana: You have the picture. Photoshop the braces away ;). Dee: Too bad indeed. That day was the first day I used internet, too bad it wasn’t earlier. Diana: See ya later 🙂

5 Responses to “Blogs and the world”